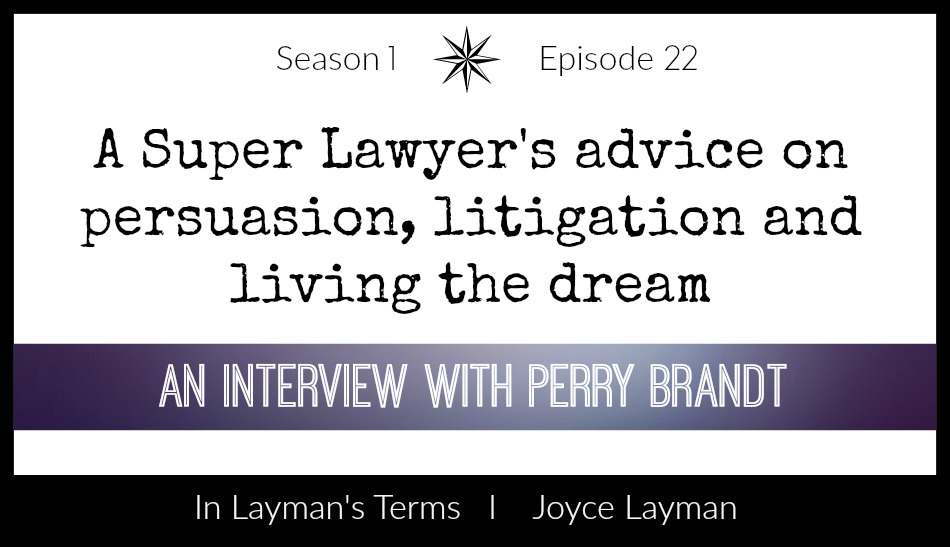 Perry Brandt’s forty-year law practice is defined not by the clients he’s served or the trials he’s won, but by principals that have made him one of the most sought-after and respected lawyers in his industry.

He didn’t have aspirations of being an attorney while growing up. The fact he even made it to college (on a full ride scholarship) was a feat in itself. It was a ‘reboot’ while at Vanderbilt that started him on a path that would lead him straight to the courtroom.

Perry is currently the Managing Partner of the Kansas City office of Bryan Cave LLP. Even though the stakes of his cases have grown from millions to billions of dollars, his fundamental perspective has remained unchanged: “As I tell young lawyers now, the challenges and responsibilities get bigger over time…but at the end of the day, it’s still a business of people trying to solve problems.” Being a lawyer is the ultimate people business.

In this episode, Perry shares a wealth of insight including his leadership philosophy, keys to persuasion and mastering skills while having fun in the process. He truly is living the dream!

Listen to the episode here.

Perry was recently listed in Ingram’s 250, the most powerful business leaders in Kansas City. His best advice, “develop your skills, develop your brand, develop your network.”As you’ll hear in the interview, he is a firm believer in making meaningful connections both offline and online. In fact, he’s connected with some of his biggest clients in the least likely places.

One of the many things I appreciate about Perry is his willingness to be accessible outside of office hours for a casual chat on social media. Be sure to connect with him on Twitter @wpbkc838, Facebook and Instagram. Of course, you’ll find him on LinkedIn too.

Perry believes in giving back and presently serves on numerous boards including Wayside Waifs locally as well as President of the Vanderbilt University Alumni Association.

Now for the value adds:

Theme Song: ACDC Back in Black (yes, and you’ll hear why in the episode)

You can find all of the In Layman’s Terms episodes on iTunes, Stitcher and Google Play. A new episode is released every two weeks so sure to subscribe for automatic updates. And if you’re so inclined, connect with me on Twitter, LinkedIn and evenInstagram. Feel free to drop me a line at [email protected]