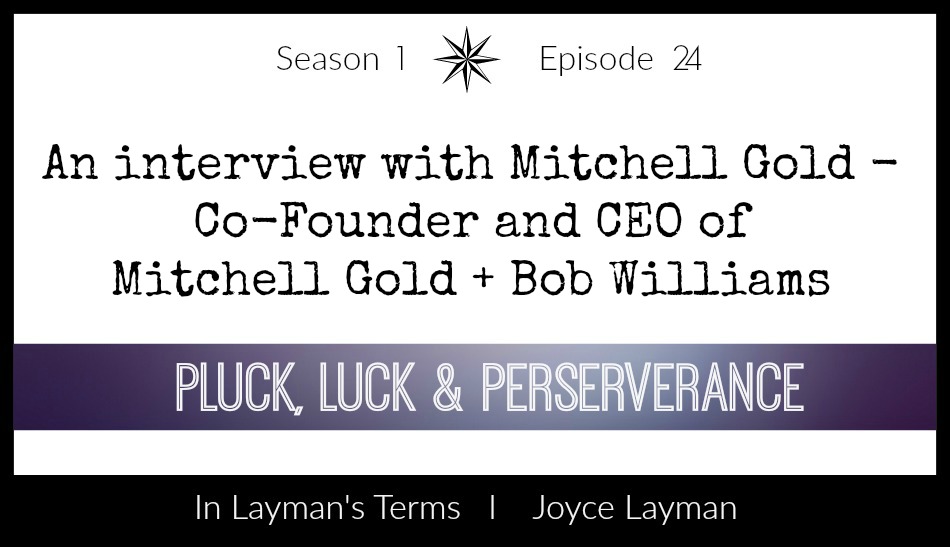 Getting fired in an unstable economy isn’t always seen as an “opportunity moment’ but in Mitchell Gold’s case, that exactly what it was. His time with Bloomingdale’s and The Lane Company gave him what he needed most to succeed: experience in business and the vision to see what needed to be changed. Getting fired provided the motivation to put his vision into action.

In 1989 he teamed up with Bob Williams and together they started Mitchell Gold + Bob Williams. From the initial investment of $60,000 their company has grown to $250 million in annual sales with 30 signature stores, boutique shops as well as an e-commerce and hospitality division.

From the start, Mitchell knew he had to break some of the rules to satisfy customers and it’s paid off in a big way. He’s a different kind of man running a different kind of company and continues to innovate at every turn. More than just focusing on forward thinking and design, he believes in investing in his employees as well as the community. The company is recognized locally and nationally for a culture that respects diversity, supports education, provides daycare and has been environmentally responsible since it’s inception.

Mitchell and his company have the very real expectation of redefining what a great brand really is by being a different type of brand…one with meaning and depth.

Listen to the podcast episode here.

In addition to furniture, Mitchell often with Bob, have been featured in the media, from Inc, to the Wall Street Journal. CBS Sunday Morning aired a segment highlighting their 25th-anniversary milestone. Their furniture is a favorite of interior designers as well as TV and movie set designers for shows like The Good Wife and The Office.

Mitchell is also a published author. His first two books, with Bob Williams, are: Let’s Get Comfortable: How to Decorate a Welcoming Home and The Comfortable Home. They also published a coffee-table business book titled, Who We Are, to mark the company’s 25th Anniversary.

As you’ll hear in the episode, Mitchell advocates on behalf of several worthy causes including the LGBT community. He’s an editor of CRISIS: 40 Stories Revealing the Personal, Social and Religious Pain and Trauma of Growing Up Gay in America and the paperback version, Youth In Crisis. Mitchell co-founded Faith in America to combat bigotry of LBGT individuals and their families.

Mitchell’s Recommended Reading – It’s Not the Big That Eats the Small…It’s the Fast That Eat the Slow: How to use speed as a competitive tool in business

You can find all of the In Layman’s Terms episodes on iTunes, Stitcher and Google Play. A new episode is released every two weeks so sure to subscribe for automatic updates. Let’s connect on Twitter, LinkedInandevenInstagram. Feel free to drop me a line at [email protected]