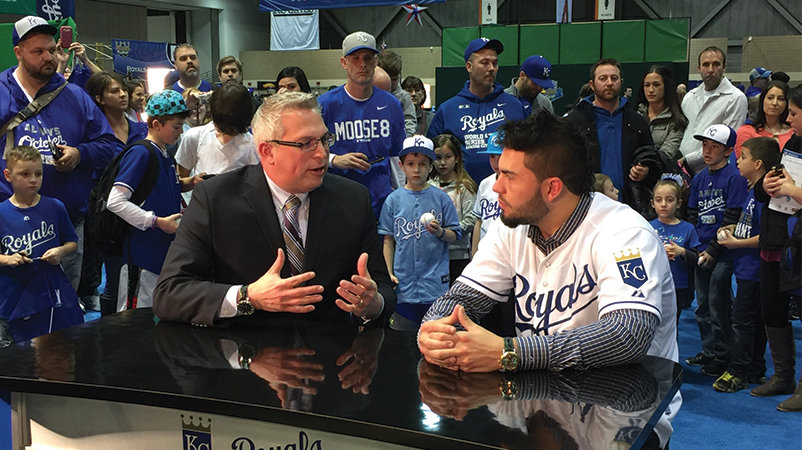 “Everyone is going to have bad days. What’s important is not letting them affect you.”

As the business of sports has evolved, so has the industry that covers them which means the competition is increasing. Joel Goldberg has spent more than 20 years in television developing and maintaining relationships with professional athletes, coaches, and team management. He’s covered top athletes from Brett Favre to Kurt Warner to the 2015 World Championship Royals. Joel has been part of the Royals’ broadcast team for FOX Sports Kansas City since 2008. During this past off season, he served as the play-by-play announcer for the ECHL’s Missouri Mavericks, and also as an analyst on UMKC men’s basketball television broadcasts.

I caught up to Joel while he was on the road with the Royals. Our conversation covered everything from his start in broadcasting (which included cold calling), defining moments, comfort zones he’s overcome, one of his oh sh#t moments which we all can learn from and of course, baseball.

Early on in his career, Joel would sit on the sidelines watching other sportscasters having deep conversations with elite athletes. Building trust with successful icons takes time and Joel learned how to cultivate those relationships. Joel shares tips for connecting with the business professionals you consider elite.  Listen to the full interview below.  (direct download)

Joel built his career around building strong relationships. He speaks to companies and organizations on ways to promote trust in every situation. You can learn more on his website. And if you’d like to follow sports updates, then be sure to follow him on Twitter @goldbergkc.

I’ve had the good fortune to interview the coolest business folks. You can find the rest of the In Layman’s Terms podcast episodes on iTunes, Stitcher and Google Play. Be sure to subscribe for automatic updates.

If we haven’t connected already, then find me on Twitter, Instagram, and LinkedIn to continue the conversation. Stay tuned for episode 38!