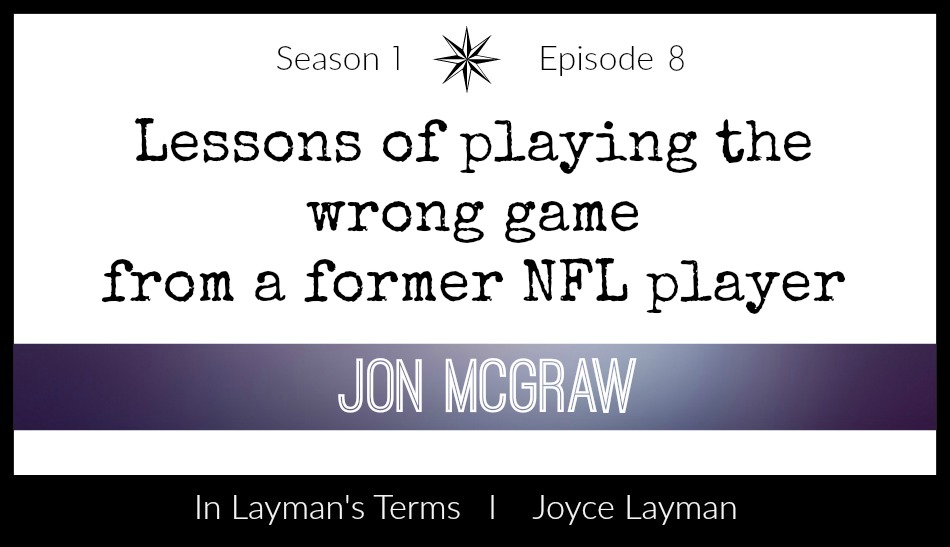 Episode 8: Lessons of Playing the Wrong Game from a Former NFL Player

An NFL player deals with constant pressure including; the opponent, hits, potential injuries and the relentless struggle to stay in the league. No matter their physical capabilities, their state of mind is the single biggest factor that affects their performance.

In this episode former NFL player, Jon McGraw, shares his lessons learned from playing the wrong game. Jon also shares the keys to create and maintain a performance mindset in business and life. If you have kids or a co-worker that frustrates you on occasion, you’ll appreciate the added insights to help them ‘play’ to their potential.

Jon attended Kansas State University with a major in business finance and walked on the football team, 1997-01. He was twice selected as a First Team Academic All American. He was a second round draft pick to the New York Jets where he played 3 seasons.  He then played for the Detroit Lions for two seasons before playing his final five seasons for the Kansas City Chiefs. Jon retired from the NFL in 2012 and received the Ed Block Courage Award. The award is presented annually to one player from each NFL team who, in the eyes of his own teammates is a source of inspiration and courage. Jon also completed NFL-sponsored business management and entrepreneurship programs at Harvard Business School and Wharton Business School. Jon has been actively involved as President of the Jon McGraw Foundation which supports various charitable causes. He is now a principal partner at Vision Pursue, a performance mindset training and technology company.

Now for the value adds and resources Jon mentioned:

Stay tuned for episode 9 – an interview with the CEO of Wiselike, Kyu Lee. Kyu has been called a rising star in the tech industry and his company was named as one of the ‘Top 10 companies to look out for in 2016’ by the Huffington Post. Imagine accomplishing all of that before the age of 25!