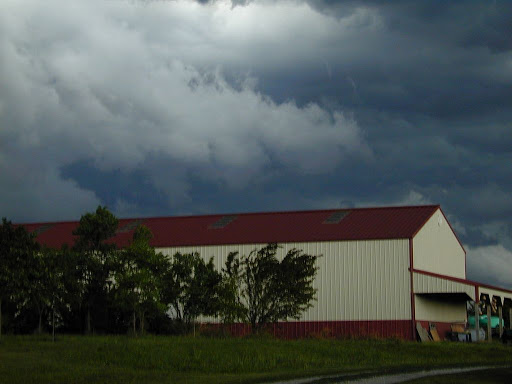 You’ve probably heard the saying, “it’s not what happens but how you react that makes the biggest difference.”

We’ve all dealt with unexpected situations; ones that are no big deal and others that test your attitude.  As a horse owner of 18 years I’ve had my share but last weekend was certainly unique. You may find it hard to imagine but cleaning stalls is actually a Zen experience for me.  The two hours I spend at the barn on the weekend is my opportunity to get away from life as usual, and the horses and cats are an added bonus.

The weather forecast called for a chance of afternoon storms.  When I arrived the sky was overcast with high winds strong enough that I had to squint my eyes to keep them free of the dirt that was whipping around in the air.  To speed up the cleaning process I put the two mares, Destiny and Bay-B, in the outdoor turnout pens, and turned the Fire, the gelding, loose on the grass out in front of the barn.  He’s arthritic so this gives him a chance to stretch his legs while grazing. Lastly I opened up Bay-El’s, the stallion, doors so he could get to his turnout pen and then started cleaning.  I heard a rumbling in the distance but figured I had plenty of time to get the stalls cleaned and horses in before the rain hit. Unfortunately Mother Nature had another idea.

Less than twenty minutes later it started sprinkling and then KABOOM the lightening showed up. Horses don’t mind being out in the rain but lightening is dangerous due to the horseshoes they wear.  I had seconds to decide how to deal with the situation.  By this time I had managed to get the indoor arena cleaned (where my horse stays most of the week) along with two of the four stalls. The tractor with trailer was parked close to the front door of the barn so I had to pull it back in case Fire came in the barn on his own accord.  I ran to get the mares that were frantic by now. The rain was coming down harder each minute and winds were getting stronger.  I trotted Destiny back to her stall and then went to grab Bay-B.  KABOOM, darn that lightening strike was close! Bay-B would have run back to the barn if I’d let her go. Now to get Fire…….KABOOM! He may be arthritic but whirled around on that strike.  Too bad he didn’t come in so I had to run outside to grab him. By this time I was completely soaked due to the ‘monsoon’.

Once inside I attempted to pull the south arena door closed.  The barn is a big metal barn approximately 120’ x 50’ and the doors are 10’ across by 10’ high.  The wind was blowing so hard that rain was coming sideways into the middle of the arena and the door wouldn’t budge. Being pelted with rain in the face wasn’t worth the effort so I gave up. Looking over I saw Bay-El was huddled up in the front of his stall and rain was blowing in. Every time it thundered the horses jumped so going into Bay-El’s stall put me in a precarious situation.  His door had upper and lower sections which were held together with a chain. The top door was hooked to a metal latch on the outside of the barn to hold it open.  I was already soaked to the skin and with no other choice went outside, took the chain off that held the doors together and unhooked the top door from the latch. The force of the wind was too strong for me.  Thank goodness instinct took over and I ducked. The top door slammed against the barn so hard a board came off.  I pulled the bottom door closed and assessed the situation. Had the top door hit me I would most likely have been knocked out laying face down in wet shavings and manure. At this point I started laughing.  I guess I could have cursed or cried but what good would that have done? As Winston Churchill said,

Attitude is a little thing that makes a big difference.

The storm blew through as quickly as it came and the sun peeked out from behind the clouds. Thinking it was gone I stepped outside and then KABOOM! Yikes, can this just be over?! Thankfully Mother Nature was saying goodbye because that was the last of any rumblings. Once the stalls were cleaned I had to put wood shavings in them for bedding.  The result of wet clothes and wood shavings gave me the appearance of a lightly breaded shake and bake pork chop.  My jeans were muddy from the knees down and my hair had a mixture of dirt and shavings from the high winds during the storm.  A Kodak moment for sure and I was laughing again. To top it off I itched like crazy from the dirt and shavings down my back. If only I could click my heels three times and be my shower at home but I still had to scrub water buckets and throw the evening feed.

On the way home I stopped to put air in one of my tires. There was car parked next to the air compressor at Quick Trip with a guy in the driver’s seat.  The look on his face was priceless. It said “what side of the tracks did she roll in from?” Once again I started laughing.  Had I been brave I would have asked him to take a picture.  I finally got home and decided the garage was the best place to leave my boots, jeans and t-shirt for fear of leaving a pig pen trail through the house to my bedroom.  I can’t remember the last time I was so dirty. Reflecting back I’m grateful that the horses were ok, the door didn’t hit me and it was 75 degrees instead of chilly. Still laughing…