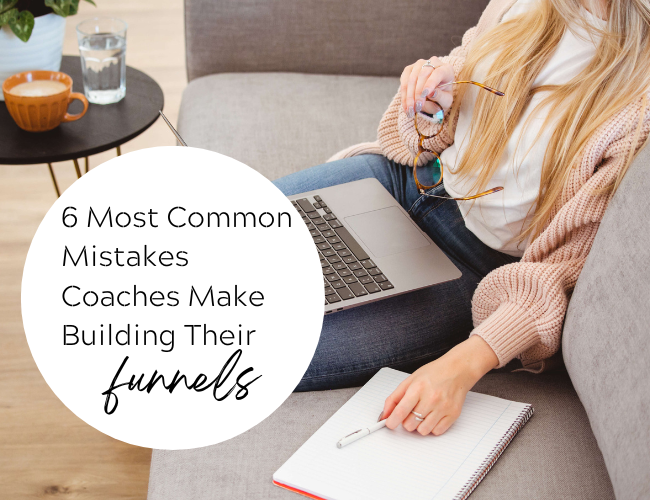 As a coach, you know your stuff. You’ve helped people achieve their goals and overcome challenges in their lives, and you want to do the same for your clients through your business. But when it comes to marketing your coaching business, you may feel like you’re starting from scratch. Don’t worry – you’re definitely not alone! Many coaches struggle with setting up effective marketing funnels, but knowing what to avoid can help make the process a lot easier. Here are six of the most common mistakes coaches make when building their funnels…

I’m shocked by how many people I talk to who say, ‘I built a funnel’ or ‘I had someone build me a funnel,’ and it didn’t work. They spent tons of money and got no clients. Especially when you consider:

It’s no wonder people don’t want to think about another funnel! But having an EFFECTIVE funnel brings you clients on autopilot. So why do so many coaching funnels fail? Here are the three biggest funnel mistakes.

Mistake #1: Giving them a solution they don’t want

Here’s the thing – as coaches, we know what people need. They need to be more compassionate, more mindful, less triggered, less anxious… but mostly, that’s not what they WANT. What they want is to be more successful, more loved by others, more attractive… It’s a common phrase – ‘Sell them what they WANT, give them what they NEED.’ If your funnel starts with something they need, like ‘remove your blocks’ or ‘remove your limiting beliefs’ you’re talking about what they NEED. You will spend a lot of time creating a killer lead magnet and writing the email series but the funnel will stall at that point. Do the research to find out what your ideal clients want right now. The FIRST step in the transformation that leaves them wanting more.

Mistake #2: Giving them too much upfront

I’m a big believer in giving. I give to family, friends, clients, and charity. But when you have a Freebie (aka a ‘lead magnet’), overgiving is the kiss of death. I’ve seen Freebies that were dozens of pages long, and had advice in them like ‘for the next 6 months, you need to…’ If your potential client spends the next six months following your advice, THEN they might reach out about hiring you. You’ve given them no reason to do anything else with you (like hire you?) until then. More likely, they’ll try your advice for 5 minutes and then forget about it. And your funnel will stall out there. Create a lead magnet that focuses on solving one problem QUICKLY. Make it easy to implement and even with that few will take action but the ones who do will be ready for more value you send their way.

Mistake #3 is related to #1, but it’s a little different. Often coaches struggle with their brand, and then with a funnel, because they’re trying to help people with the underlying cause of something (aka what they need, not what they want.) Then they’ll realize, ‘if I’m helping people get unstuck, then I can help EVERYBODY.’ Except most people don’t think of themselves as someone who’s stuck. They think… … I can’t get a promotion … I can’t find a boyfriend/girlfriend … I can’t lose weight I’ve had coaches say, ‘I help women in transition.’ I ask ‘what kind of transition?’ They say ‘divorce, empty nest, new job, moving, being widowed…’ Wow. I don’t know many people in those situations who say ‘I’m in transition.’ They describe the exact type of transition – ‘I’m getting a divorce’ or ‘I’m taking a new job.’ So going broad doesn’t help you – it just confuses your ideal client. The key is to get clear on the transition you help your ideal clients achieve. Now that you know what you want to create, let’s talk about the other three common funnel mistakes.

Mistake 4: Relying too much on the tech platform

It used to be that you had to have a geeky tech web wizard to build a funnel. It costs upward of 10K and was NOT a DIY project. That meant that the only people who created funnels were people who had successful businesses and had managed to figure out marketing and sales. Nowadays, there are many tech platforms that promise ‘you can build a funnel in a few hours’. While that’s technically true, it doesn’t mean that your funnel will be any good! The tech platform is only the blueprint, it’s not the whole story. It’s like if you tried to bake a cake from a recipe, but instead of using flour, you used talcum powder. After all, they look kinda similar… NOT a good plan. Determine the platform you are going to use and then make sure your message and look are on brand for your business.

Mistake 5: Not getting feedback on each little part of your funnel

Even simple funnels are made up of a fair number of moving parts. Most coaches are taught to be great coaches, and they aren’t taught to be experts in the marketing language and flow of each funnel part. If you have 22 steps in your funnel, if you get even one or two of them wrong, it won’t work. Another analogy is building a pipeline to bring water from a lake to a faucet. If even one of the pipeline connections is blocked, no water flows, even if everything else is done well. After all, when a house is being built, there are inspections every step to ensure that the elements in the house actually work – the electricity works, the plumbing works… Your funnel is no different. Getting feedback on each part is critical. But most funnel-builders want you to figure that stuff out on your own. Start with a simple process – an opt-in page with a lead magnet leads to a thank you page and a three to five-part email series to nurture the relationship.

Mistake 3: Using the wrong language in your funnel

Coaches tend to get their language from their clients in order to market to new clients. That’s a good idea, right? No. Not if the clients give you their words after working with you for a while. I call that ‘post-transformational language.’ It’s the language your clients use after they have benefited from your awesome coaching. Your funnel requires ‘pre-transformational language.’ And most coaches have been on the other side (the good side!) of transformation for so long, that they don’t know how to create that language. So what do you do? Make sure you’ve completed the action item in Mistake #1 and do your research.

Are you making any of these mistakes? Not sure? You’re not alone. If you’re ready to start attracting clients who have the resources to pay you – NOW – and who are eager to pay you what you’re worth… then let’s fix this. Request a Clarity Call.

Grab it for FREE! 30 Irresistible Lead Magnets Your Audience Will Actually Want To Sign Up For + a Canva template to create your own!